It is now several weeks since I saw the Vladimir and Estragon piano duo perform at nonclassical, but the performance remains imprinted on my mind for its freshness, its vitality, and its inescapable, bursting sense of fun. The above video captures something of the breakneck urgency with which they tackle Ligeti's Sonatina, a piece so often robbed of its hectic, urban rhythms and reduced to a rather stately pomp. Alas, the camera position does not allow the viewer to get a sense of how charming the pair are to watch. Whether playing Schubert or Samuel Barber, one can't help but think of Chico and Harpo Marx playing vaudeville tunes in Animal Crackers - and this is, of course, entirely to their credit. 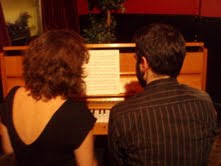 There is a certain air of Victorian respectability clinging to the 'piano two hands' repertoire. Musicologist Philip Brett once said, "Piano duets tame the concert-hall repertory of symphonies and chamber music for the drawing room and substitute private intimacy for their busy public rhetoric." However, although there is certainly an intimacy to watching Vladimir and Estragon, a certain sense of being invited into their living room, or their private world, there is little to be considered tame. In their gleefully anarchic romps through a repertoire on the borders of respectability (Wolfgang Rihm, Edvard Grieg ... ) there is a kind of soft subversion, a teasing provocation. 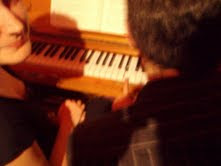 Though in life, Samuel Beckett, a writer steeped in music, chose to collaborate with rather austere modernists like Morton Feldman and Charles Dodge, his characters (as in All That Fall) are perhaps rather more likely to listen to Schubert. A composer probably more associated than any other with the 'four hands' canon, Schubert's most notorious duet is the sexually charged Rondo in D, a sort of dance of seduction which ends with both players crossing hands, the music leading them quite literally into each other's arms. To Vladimir and Estragon then, a piano duo as sensual, as irreverent as Schubert himself. 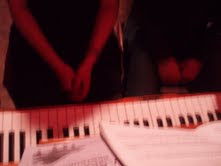