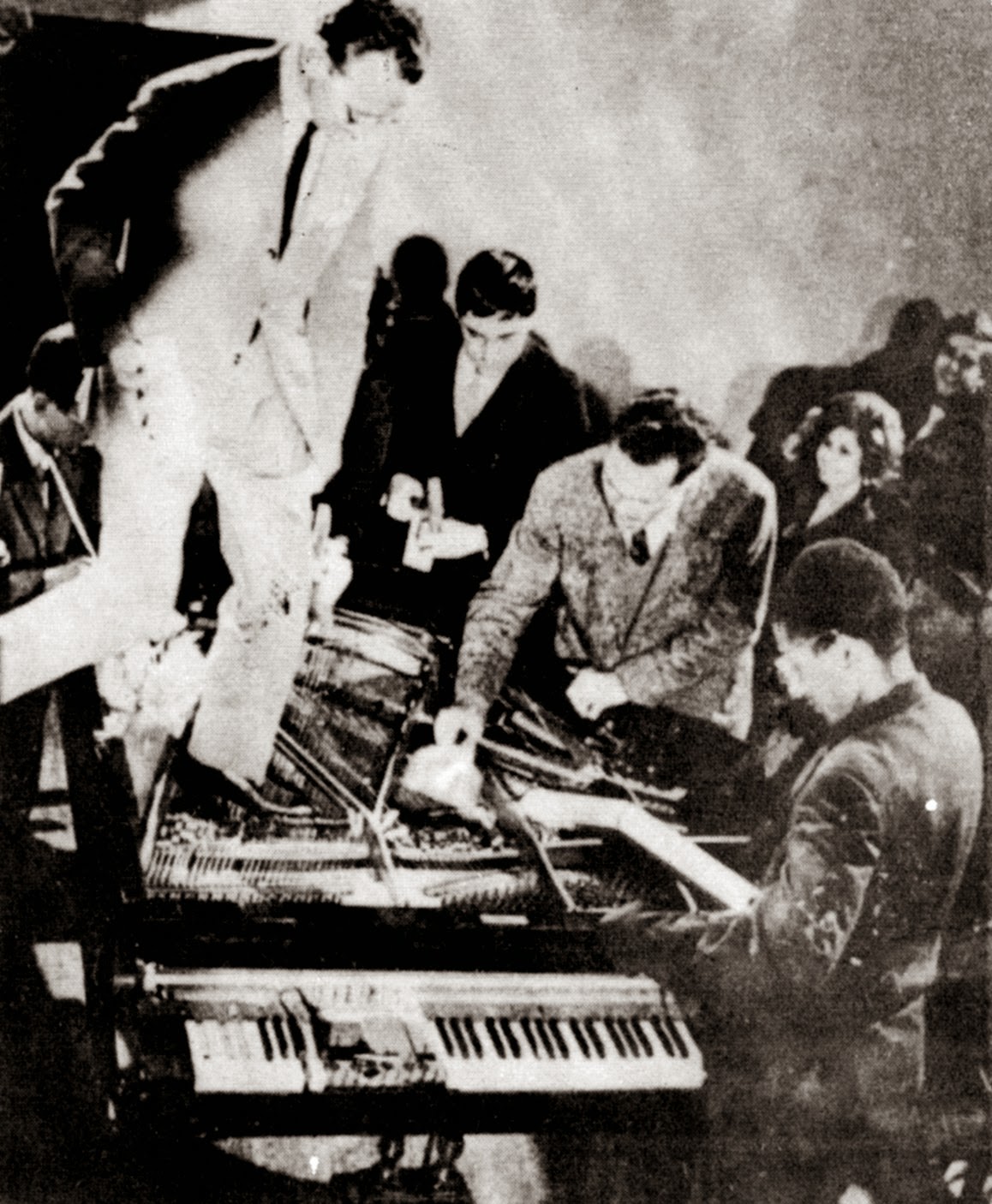 “Beethoven’s piano famously spewed broken strings out of its case in his more ferocious moments, but Liszt apparently broke the cases themselves. After one of his opera paraphrases the heaving, trembling instrument would be at his feet, utterly spent, and a new one would have to be carried out on to the stage from the wings. Those early, wooden-framed pianos simply could not cope with playing which now flowed in energy and force from shoulder and back, rather than merely with the earlier wrist and forearm technique of a Hummel or a Czerny.”


– from Stephen Hough, ‘Liszt: The Man Who Broke Pianos’

“Savinio’s performance techniques included smashing the piano with his fists and dragging a board up and down the keys. The results were predictable but exciting. After one concert André Billy recalls hearing Apollinaire exclaim: ‘He broke the piano! Now that’s what I call a musician!’ In a written review of the same concert, Apollinaire goes further: ‘I believe that within two years he will have broken all the pianos existing in Paris, after which he might leave to traverse the world and break all the pianos existing in the universe. This will perhaps be a good riddance.’”


– from Christopher Schiff, ‘Banging on the Windowpane: Sound in Early Surrealism’

“He had the crowd screaming and rushing the stage, and when it seemed that the screams had grown loudest and the rushing most chaotic, he stood, licked the piano stool away with violence, and broke into ‘Great Balls of Fire’. As the screaming chaos grew suddenly and sublimely greater, he drew from his jacket a Coke bottle full of gasoline, and he doused the piano with one hand as the other banged out the song; and he struck a wooden match and he set the piano aflame, and his hands, like the hands of a madman, did not quit the blazing keys, but kept pounding, until all became unknown tongues and holiness and fire, and the kids went utterly, magically berserk with the frenzy of it all … ”

“It was a strange time to start learning the piano. In the 1950s, when I was a boy, it was the fashion in England to hold piano smashing competitions. Because television had arrived. The piano in the front parlor in most houses became suddenly redundant. And there was little or no demand for secondhand pianos. So all around the country, at school fêtes and country fairs, an orgy of piano smashing broke out. On village greens, on football pitches, teams of men with sledge hammers, axes, hacksaws and crowbars attacked upright pianos and reduced them to debris that had to pass through a hoop about two inches in diameter, to verify that the destruction was whole-hearted and thorough.”

“I witnessed a piano-smashing only once. I was shocked by it. To see two teams of grown men wantonly laying in to two defenceless uprights, to see felted hammers flying everywhere, tangles of springy piano wire, splintered wood and the black and white ivories lying slaughtered on the green grass. Now, years later, I think that it was possibly also a symbolic act, the ritual destruction of repressive Victorian values, embodied in the piano, which deserved to be taken out on to the village green by right-thinking English yeomen and smashed. Decades of primness, prudery and piety in the parlor, of hypocrisy and violence, of empire, wars and colonialism. All this projected on to the piano, around which families prayed and sang hymns and parlor songs of fervent faith and patriotism. But the craft that went into an upright piano! All gone in a twinkling. And a tinkling. How very sad it was.”


“Some time in the mid 1960s, by which time I’d been doing my head in the piano thing for a few years, I saw a feature on telly about people smashing up a piano with sledgehammers. It not only looked fantastic, it also sounded like nothing I had ever heard before. What I wanted to do was get a sledgehammer and smash up our piano just to hear those sounds at close quarters for myself.”

“At that time the country was full of old pianos that nobody could play anymore. They were all left over from a time before radios and record players, when people had to make their own music. To be able to play the piano was a social skill that many a young man aspired to. Every pub had one. But you know that, you’ve seen enough old films. There was another problem for these old pianos. Central heating. When it came in for the masses in the 1960s. central heating completely fucked these pianos. Buckled their frames, made them impossible to keep in tune.”

“After this one showing of a piano being smashed on telly, piano smashing swept the country. No village fete was complete without a piano smashing contest. Soon all the pianos available for smashing in the country had been smashed. So piano-smashing faded from the place it held for a few years in the public imagination and popular culture. Except I kept dreaming of smashing our piano.”

5. ‘Piano Activities’ by Philip Corner (as performed at the Wiesbaden Fluxus Festival, 1962)

“In Philip Corner’s Piano Activities, performed in 1962 at the first Fluxus-titled festival in Wiesbaden, Germany, Dick Higgins, George Maciunas, Alison Knowles, and Emmett Williams engaged in the apparent destruction of an old, unplayable piano belonging to the Kunstverein. They did destroy the instrument, but not haphazardly … the careful rubbing of a brick over the strings, the patient waiting for the right moment to use a hammer.”

“The work was not originally intended to include the destruction of the instrument, although in this performance the activities were interpreted as such and the piano was taken apart violently with crowbars, saws, and hammers. Corner was against any wanton destruction, but when informed that the parts had been turned into sculptures he understood that the piano had been positively transformed by its breakdown.”

– from Caleb Kelly, Cracked Media: The Sound of Malfunction

“Set upright piano (not a grand) in an open space with the lid closed.

Spill a little lighter fluid on a twist of paper and place inside, near the pedals.

Balloons may be stapled to the piano.

Play whatever pleases you for as long as you can.” 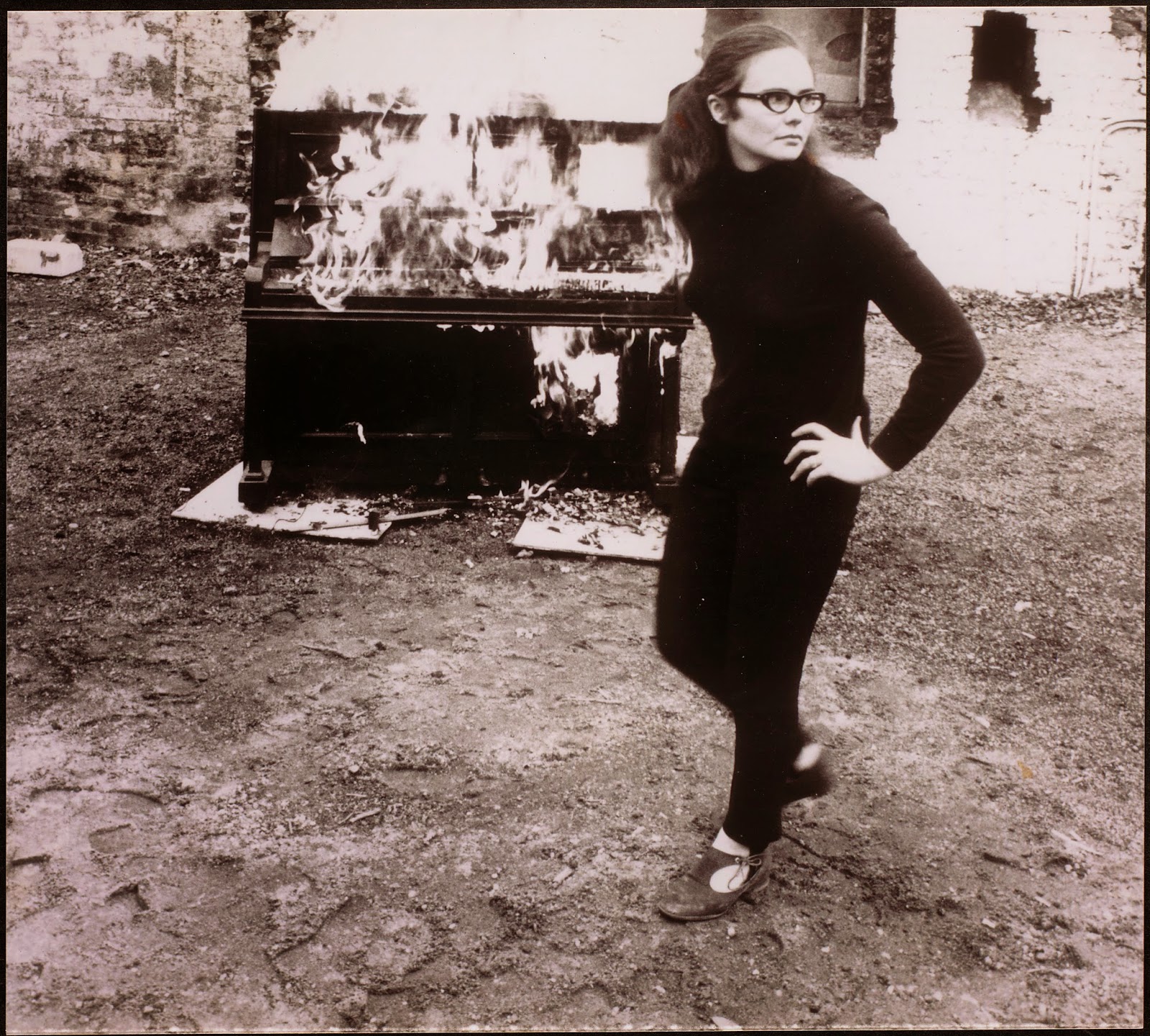